Own your data strategy with Narrative's data streaming platform

Get the data you need

Own your data strategy with Narrative's data streaming platform

Get the data you need

Achieving the promise of the data economy

Data is the new oil has become such a common refrain that one might think the phrase has been with us since the time of Shakespeare. In reality, it was coined in 2006 by Mathematician Clive Humby about data needing refinement, much like oil, to extract its real value.

“Oil changed the world in the 1900s. It drove cars, it drove the whole chemical industry,” Krzanich explains. “Data, I look at it as the new oil. It’s going to change most industries across the board.”We Need to Eliminate Bad Actors.

At Narrative we agree that data can be just as transformational as oil, but the analogy isn’t perfect. To reach its full potential, organizations are going to have to understand the opportunities and challenges data presents and think about how to apply those to their specific needs.

Right now, that isn’t happening nearly enough. Something about refining data only gets you so far unless you know what you want and what to do with it. And that’s a huge ongoing challenge in nearly every industry.

When we launched Narrative, we outlined some core beliefs that have been the guideposts for how we’ve built the company and our technology.

Data Needs to be Useful and  Specific

One of the most significant problems with the word data is that anything that means everything means nothing. Data is most potent when it conveys specificity, and even then the specificity has to have utility for the problem at hand. To complicate things even more, every use case is going to have their own unique needs meaning that the value of any data point can vary wildly. One man’s data trash is another man’s data treasure, at a given moment - so to speak. 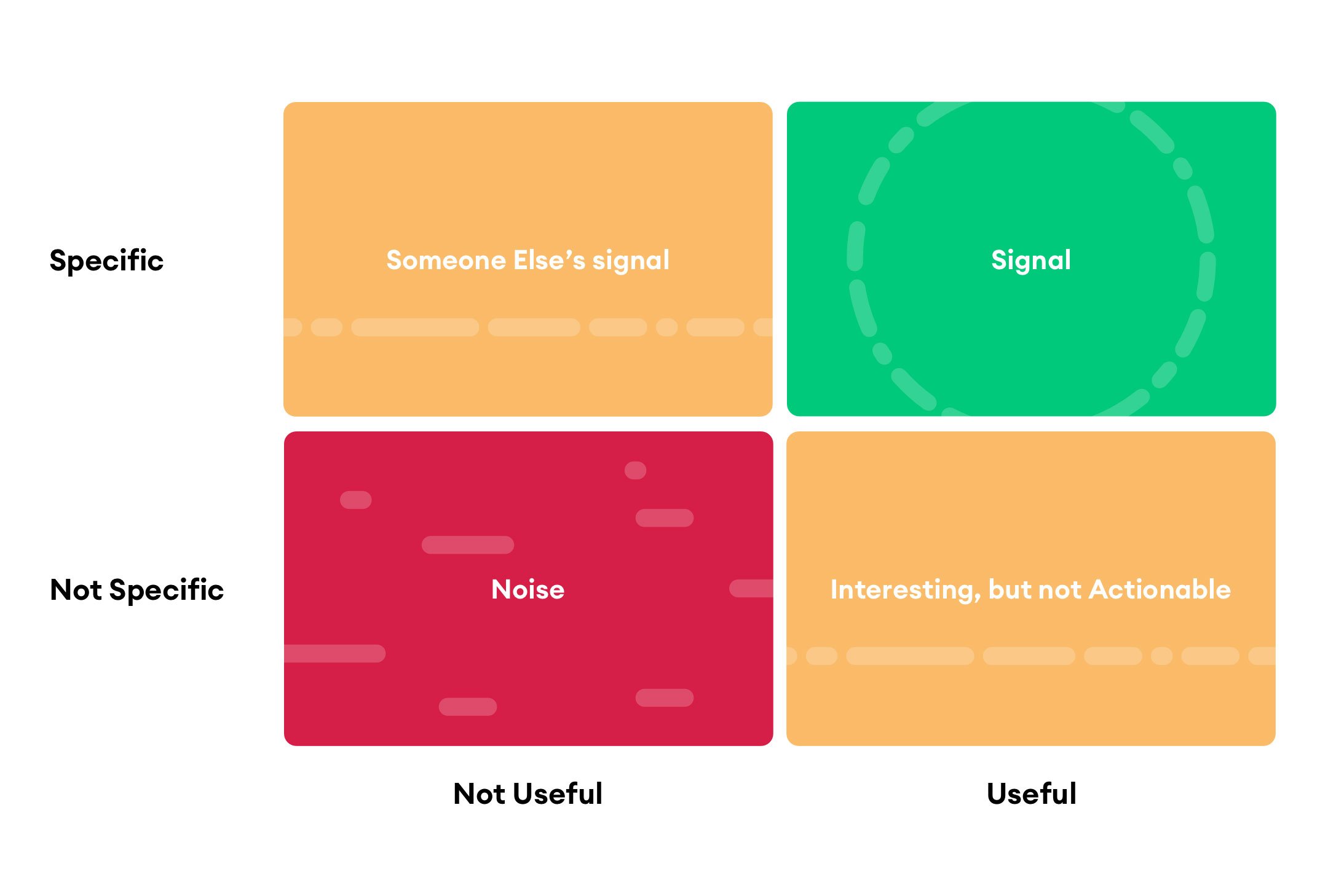 Data that isn’t specific or useful is just noise. The data economy will be built on the back of signal.

Take this trivial example of how we use data in our own lives. Assume that I would like to play golf next weekend, but before I make a tee time, I’ll check the weather forecast. If I looked at my favorite weather app and it told me that the record low temperature on the day I wanted to play was 42°, that the record high temperature on that day was 91°, and that historically it had rained on that date 18% of the time I would have no idea if I should book my spot on the course. The data just wasn’t specific enough.

Taking that same example, the app could tell me that there was a 0% chance of rain and the low would be 68° with a high of 79° in Pebble Beach, California. Much more specific, but to the extent that I live in New York, not very useful because I’m not going to hop on a plane to play a round of golf.

For the weather data to be useful, I need it to be specific and useful to my unique needs. While this is a silly example, the same holds for more complex data needs.

You Can Never Have Enough Useful and Specific Data

Organizations who have not come to terms with understanding the difference of data broadly vs. data with utility are starting to express the sentiment that they “have too much data” or “don’t need any more data.” Logic would tell us that this belief can’t possibly be true. If data is useful you by definition can’t have enough of it and if you have enough of it the net new data isn’t useful. After all, you rarely hear companies complain that they’ve refined too much oil.

In economics, utility is a number, most often a currency value. If our objective function is to maximize the benefit to our organization, we can never have enough useful data. If we accept that premise, the question is no longer if we want the data or not, it is if we can obtain the data, by whatever means, for less than its value to us.

Companies Will Have to Source Data Externally

With data as the underpinning of growth and innovation strategies, this information gap will naturally lead to strategies to procure data through commercial relationships and partnerships. Data acquisition has become imperative.

Increased Demand Will Create Opportunities for Companies to Monetize Data

We believe that the data economy will be demand-driven and that the extraordinary size of demand will lead to an increase in businesses meeting that demand through data monetization strategies. Data has a unique property that most monetizable assets don’t in that it can be sold multiple times with almost no marginal cost.

Imagine if you could sell a company a barrel of oil, and then sell another company that same barrel of oil. This resale potential creates more robust opportunities for companies to build a business on. Although if not run strategically, sellers run the risk of commoditizing the data.

In part two of the Narrative Manifesto we dive deeper into what we believe needs to happen in order to identify useful and specific data for your data strategy, and how we’re acting on those beliefs.